Collaboration of CINE with a group from UK generates a review on photoelectrochemical analysis techniques. 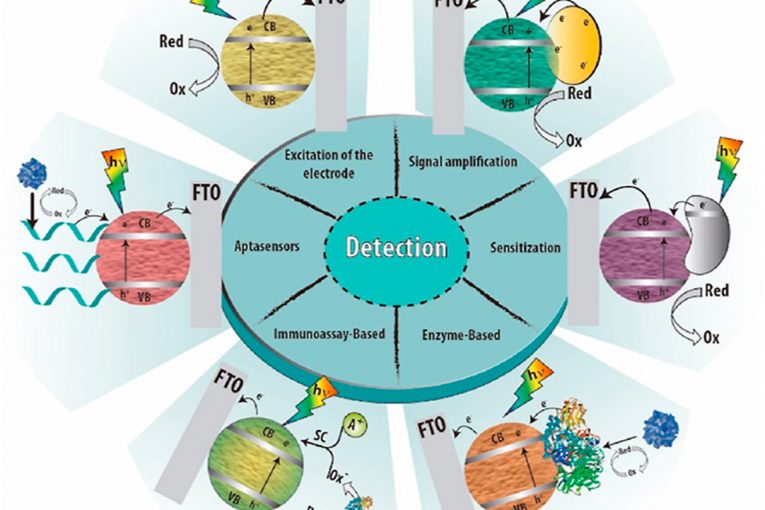 A review paper on photoelectrochemical methods of analysis and detection is the most recent result of the collaboration between the research group of professor Lucia Helena Mascaro (UFSCar, Brazil), a CINE researcher, and the group of professor Frank Marken (University of Bath, United Kingdom).

Published in the February issue of the journal TrAC Trends in Analytical Chemistry (impact factor 9.8), the article was written during the research internship that the PhD student Sirlon Blaskievicz did in the group of professor Marken. Sirlon, who is doing his doctorate at UFSCar under the supervision of professor Lucia Helena, arrived in Bath in March 2020, a week after the university’s laboratories were closed due to the pandemic. The revision article was written during the three months when the laboratory was closed, by virtual interaction with the groups of professor Marken and professor Lucia Helena.

The article presents a critical review of the scientific literature on detection and analysis methods (sensors) based on photoelectrochemical reactions of semiconductors, in which the materials, by being illuminated, react chemically and generate electricity. These materials can be used both in sensors and in devices of the area of new energies which use sunlight as an energy source, such as, for instance, reactors for hydrogen generation or for conversion of CO2 into other molecules.

“The advantage is that, when we use a material in photoelectroanalysis or photobioelectroanalysis, we can often understand the process of interaction of different analytes in several types of matrixes with the semiconductor’s surface”, explains professor Lucia Helena. “This interaction with subsequent redox reactions can help in the development of devices for the energy area by improving its selectivity to a given molecule, or even its stability”, she completes.

The collaboration of CINE’s researcher with the Bath scientist, which has already generated 13 joint publications, started in her post-doc, done in the British university between 2013 and 2014, and was maintained through visiting professor projects and PhD internships. “In my viewpoint, international collaborations are very valuable to form students and bring many personal benefits such as resourcefulness, learning of another language, interaction with foreigners and knowledge of other research cultures and structures”, says professor Lucia Helena. “Concerning the group, the student brings his or her experience with other techniques, other visions on his or her research and new ideas”, she completes.