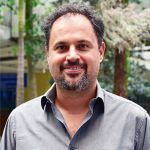 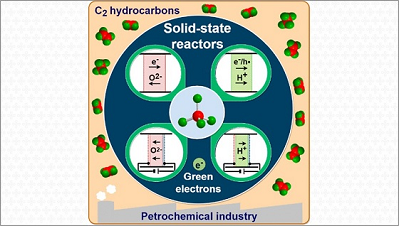 A study carried out within CINE’s Methane to Products (M2P) division addresses advances in the development of solid-state reactors, a technology that makes it possible to produce hydrocarbons in a cleaner and more sustainable way than the conventional one. With this technology, methane (a greenhouse gas) can be converted into more useful compounds through electrochemical reactions driven by renewable energies.

Solid-state reactors (so called because they use solid electrolytes) are especially promising considering the increasing availability of solar and wind energy, large reserves of methane gas and increasing demand for hydrocarbons. Formed only by carbon and hydrogen atoms, hydrocarbons are raw-materials for plastics and other materials widely used in our daily lives. Currently, hydrocarbons are produced by the petrochemical industry in multi-step processes that generate carbon emissions and other pollutants and that generally depend on oil. However, they can also be obtained from the conversion of methane.

Among the methane conversion technologies, solid-state reactors stand out for carrying out the two main steps of the process in a single piece of equipment. “The use of these solid-state reactors to control the reacting species and separate the products in a single step brings a crucial advantage to make these processes viable on an industrial scale”, says Fabio Fonseca, researcher at IPEN and coordinator of the M2P program at CINE. However, in order to be used outside the laboratory, this technology needs to be developed further.

In the context of CINE, the development of technologies and processes to convert methane into products is the major challenge of the M2P program, which brings together about 60 researchers from IPEN and UFABC. “The projects led by IPEN and UFABC have brought to CINE the competence to use solid oxide fuel cell technologies in these reactions”, says Fonseca, who has been researching these devices at IPEN for about 20 years. Currently, the M2P team is leveraging its knowledge of fuel cells, that usually are used to generate electricity from hydrogen or ethanol, to develop solid-state reactors for methane conversion. Mainly, the team is working on catalysts that can be coupled to fuel cells to directly convert methane into hydrocarbons. “These materials are being optimized with advanced technologies, such as controlled-shape nanoparticle synthesis, and tested under reaction conditions in solid oxide fuel cells to obtain higher conversion rates and stability”, says Fonseca. Catalysts, in fact, are very important elements in the conversion of methane, which, because it is a very stable molecule, is difficult to break down to form new compounds.

In the group’s most recent article, which was published in the high-impact journal Chemical Reviews, members of CINE’s M2P reviewed the scientific literature and concluded that solid-state reactors can play an important role in reducing carbon emissions and mitigating climate change by impacting the chemical industry. In addition, they pointed out what would be the most promising developments to achieve this goal: advanced manufacturing methods that have been scaled in the fuel cell industry and advanced materials for solid electrolytes, combining them with last generation catalysts. “Such developments require continued and long-term investment, and can be a key point in the future decarbonization of petrochemical industrial processes, which is often neglected in the context of more sustainable energies”, concludes the CINE researcher.