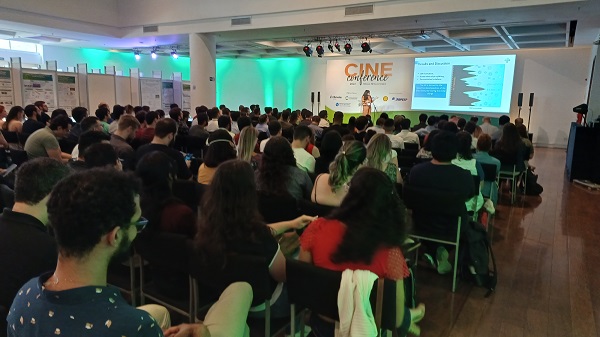 About 200 people gathered on October 18 and 19 at the Vitória Concept hotel in Campinas to participate in the third edition of the CINE Conference. The event, organized by the Center for Innovation in New Energies (CINE), presented and discussed scientific advances in technologies that aim to reduce the emission of greenhouse gases into the atmosphere and, in this way, contain climate change and its negative effects on the planet and humanity.

At the opening, the conference had speeches by the Director of the Center, Professor Ana Flavia Nogueira (Unicamp); the President of Unicamp, professor Antonio Meirelles; the Scientific Director of Fapesp, Luiz Eugênio Araújo de Moraes Mello, and the Manager of the Research and Technology Program in New Energies at Shell, Camila Brandão, who acts as Deputy Director of CINE. The speeches of the authorities highlighted the importance of aggregating skills and investments from academia and the productive sector to achieve results that benefit society as a whole. “You are playing a very important role for the country and for the world in building the future we want to see,” Camila Brandão told the audience, made up mainly of researchers and students. The deputy director recalled the impact of science on everyday life. “Every technology that we use has a lot of scientific research embedded,” she added.

During the two days of the event, the contributions of CINE members were presented through 75 posters and 9 oral presentations. The program also included four lectures by distinguished scientists from academia and industry, from Brazil and abroad. Presenters showed advances in the development of new batteries, supercapacitors and solar cells, as well as systems for the sustainable production of hydrogen and chemical compounds of industrial interest. The works addressed the main challenges to make these technologies viable: to use materials based on elements that are abundant and well distributed on the planet, to develop inexpensive and scalable processes and to increase devices efficiency.

In addition, the presentations showed innovations in the development of scientific tools that are necessary to continue advancing the area of ​​new energies. Such is the case of machine learning, which constitute the fastest and most economical way to discover new materials with desired properties. In the experimental research area, the emphasis was on “operando” techniques based on the use of synchrotron radiation, which allow the study, for example, of the changes that materials experience during the operation of a battery, in real time and with a unparalleled precision. “I was impressed with the work of CINE members in the development of scientific methods and instrumentation”, commented Professor Osvaldo Novais de Oliveira Junior (IFSC-USP), who chairs CINE’s international scientific council. “These techniques, especially those associated with the Brazilian Sirius Synchrotron Light Laboratory, may be used by the national and international scientific community, both in the area of ​​new energies and in other fields of research”, he highlighted.

At the end of the event, the five best posters, presented by young members of CINE, were distinguished with cash prizes granted by the scientific journal ACS Energy Letters and vouchers from the publisher of the Royal Society of Chemistry. The evaluation committee featured members of the international board of CINE who were present at the event: Professors Prashant V. Kamat (University of Notre Dame), James Durrant (Imperial College London), Michael F. Toney (University of Colorado Boulder) and Magda Titirici (Imperial College London).