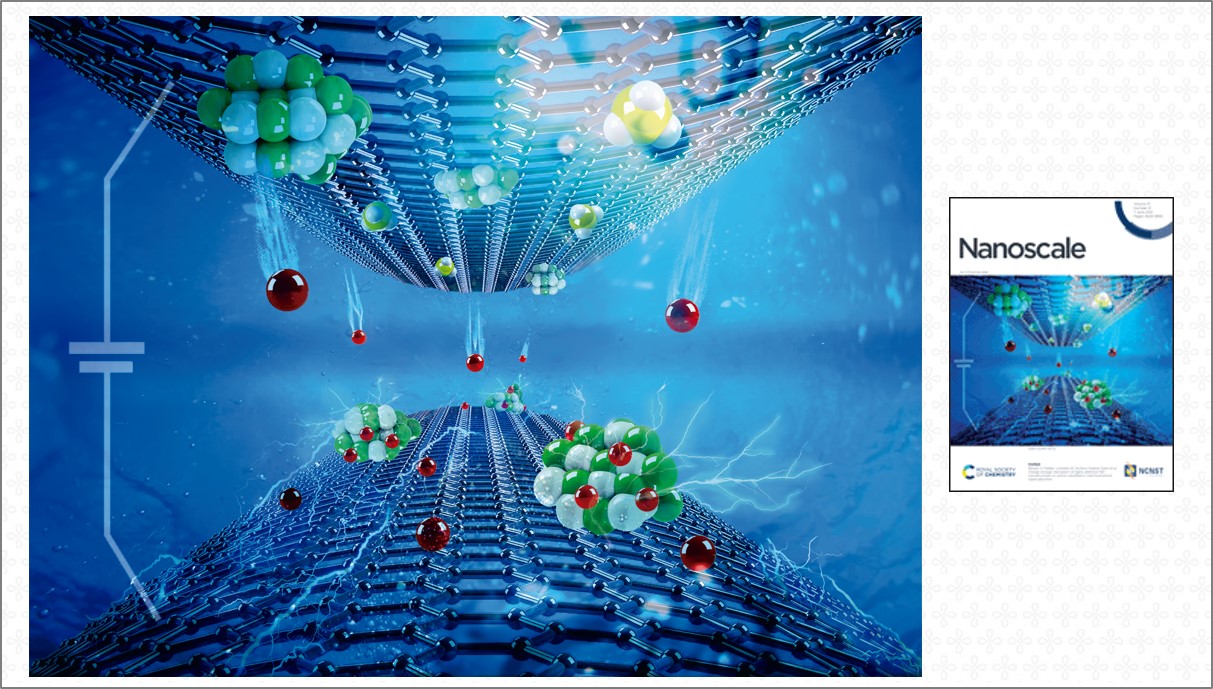 Speed ​​champions in the storage and delivery of electrical energy, supercapacitors can play a very important role in a society that is less and less dependent on fossil fuels and more and more reliant on the use of electricity.

In order for supercapacitors to perform well and be able to store the greatest possible amount of energy, the choice of the electrode material is essential. Among the favorites are composites formed by carbon nanomaterials and metal oxides, as they combine the large surface area of ​​the former and the electrochemical activity of the latter.

In fact, for a supercapacitor to charge (that is, store energy) several phenomena occur at the interface between the electrode and the electrolyte, mainly the insertion of ions from the electrolyte into the electrode structure (called intercalation) and the transfer of electrons generated through electrochemical redox reactions.

A research work conducted by CINE researchers and collaborators makes an important contribution to the study of these materials for supercapacitor electrodes. A paper on the work was published in today’s issue (June 7) of Nanoscale and featured on the cover of the journal.

The study reveals details about the processes that occur at the interface between a material composed of carbon nanofibers and nickel oxide nanostructures (working as an electrode) and a solution based on lithium ions dissolved in water (working as an aqueous-based electrolyte, particularly interesting for not using solvents that harm the environment).

The authors obtained a material optimized in its properties. By making nickel oxide grow directly on carbon nanofibers, they achieved synergism between the chemical elements, at the atomic level, which resulted in an excellent capacity to store and conduct electricity, in addition to durability and stability.

The electrode was submerged in the aqueous electrolyte and charged by applying an electric current. At that time, the authors observed the interactions between both components “in operando” (that is, while the electrode was in operation). For this, they used Raman spectroscopy, a technique capable of providing relevant information about the chemical and structural changes that occur in materials.

“The main impact of the work was the analysis of Raman operando which, in the present study, revealed to the scientific community that the intercalation / deintercalation of H + and, to a lesser extent, Li + ions can occur during polarization in aqueous solutions of according to the ‘substitutive solid state redox reaction’”, details doctoral student Willian Gonçalves Nunes (UNICAMP), member of the Advanced Energy Storage Division at CINE.

“Furthermore, from an applied point of view, we have a very chemically stable device that provided high cyclability, in addition to a high capacity to store energy,” adds Willian, who is the first author of the article. In fact, in tests, the device completed 10,000 charge and discharge cycles, losing just 2% of efficiency in the last cycle.

Thus, the study showed that the composite of carbon nanofibers and nickel oxide is promising for applications in water-based supercapacitors, and consolidated the use of operando Raman spectroscopy to study supercapacitor materials.

The research was carried out within the doctorate of Willian Nunes, under the supervision of Professor Hudson Zanin (UNICAMP).

Link to the cover (inside front cover): https://pubs.rsc.org/en/journals/journalissues/nr#!issueid=nr013021&type=current&issnprint=2040-3364