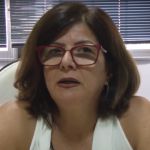 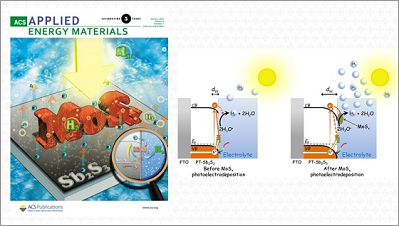 In an article featured on the cover of the journal ACS Applied Energy Materials, CINE researchers present a promising material for the generation of green hydrogen on a large scale.

Hydrogen is a renewable fuel that does not generate carbon emissions during use. However, the hydrogen production methods available today are not environmentally friendly. One of the cleanest and most sustainable alternatives to obtain hydrogen is to split the water molecule through electrochemical reactions, using sunlight as a source of energy. This process takes place in photoelectrochemical cells, which are simple equipment formed by a cathode and an anode (electrodes), where reactions that generate hydrogen and oxygen occur.

For this technology to be used outside the laboratory, one of the main challenges is to develop materials for the photocathode, using abundant and non-toxic raw materials. These photocathodes must be efficient in their task of generating charges when excited by light. “These materials have the function of generating positive and negative charges when illuminated, as if they were the positive and negative poles of a battery, and these charges lead to the reduction reaction of water, which has in its composition the proton, species H+, which, when reduced, generates hydrogen gas, H2”, explains professor Lucia Helena Mascaro (UFSCar), co-author of the work.

Within CINE’s division Dense Energy Carriers, Professor Lucia leads a group of researchers that has been working on the development of that kind of materials. In recent works, they have tried to optimize antimony sulfide (Sb2S3) – a semiconductor that, despite fulfilling the desirable conditions for a good photocathode, had its performance limited by the charge recombination process that occurs in its structure. In this process, the positive and negative charges generated by the action of light recombine in search of stability, thus limiting the reactions that are needed to generate hydrogen. Therefore, the challenge is to decrease the rate of charge recombination and, thus, make more electrochemical reactions occur and more hydrogen to be generated.

To this end, CINE researchers deposited molybdenum sulfide (MoSx) nanoparticles on the surface of antimony sulfide films using the photoelectrodeposition technique – a method that uses light to incorporate nanoparticles at specific points on a surface, achieving high precision. After the deposition of the catalysts, the scientists observed that the recombination of charges in the films was reduced and, as a result, the generated current doubled and the photocathodes significantly increased the amount of hydrogen produced.

The work improved the performance of these films in hydrogen generation, using abundant, non-toxic materials and low-cost, scalable processes. According to the authors, the material they developed becomes a highly promising candidate for obtaining hydrogen on an industrial scale in photoelectrochemical cells.

Authors who are CINE members: Moisés A. de Araújo (member of CINE at the time of the research), Magno B. Costa (PhD student at UFSCar) and Lucia H. Mascaro (professor at UFSCar).