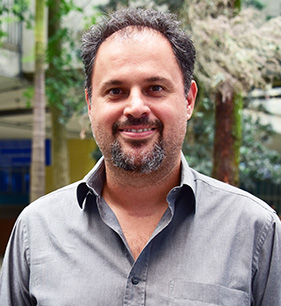 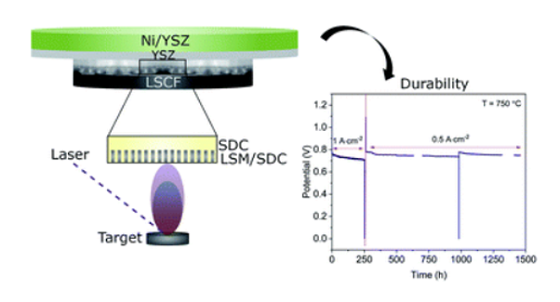 A research work carried out with the participation of CINE researchers advances the improvement of solid oxide fuel cells (SOFCs). These devices can become increasingly important in the context of the energy transition because they are very efficient to generate electricity from a fuel, with zero or low carbon emissions. The technology is already used, for example, in the ethanol electric car, whose prototype was launched by the automaker Nissan in 2016. “This research takes another step towards the commercialization of solid oxide fuel cells”, says Fabio Fonseca, a researcher at IPEN and a CINE member who participated in the work. “Our contribution helps to increase their durability and performance”, he adds.

SOFCs are formed by solid layers of different materials, generally from the oxide family. Each layer fulfills a specific function within the final objective of promoting the electrochemical reactions that produce the desired electric current. In broad lines, the cathode generates oxygen ions, which travel through the electrolyte to the anode, where they react with hydrogen to generate electricity. The cells can be supplied directly with hydrogen or with molecules that contain hydrogen in their composition, such as ethanol.

Despite their high efficiency in converting the chemical energy of hydrogen into electrical energy, SOFCs still have some limitations, mainly regarding their stability, that is related to phenomena that occur at the interfaces between the layers. Particularly at the interface between the cathode and the electrolyte, the exchange of certain ions promotes the formation of unwanted chemical compounds, which worsen the performance of devices over time and reduce their life cycle.

To face this problem, Fonseca and the other authors of the work carefully developed a new layer capable of generating the necessary electrochemical reactions on the cathode and, at the same time, preventing unwanted exchanges with the electrolyte. Formed by two films of oxide materials, 200 nm thick each, the layer was added during the assembly of the fuel cell using the pulsed laser technique. “This advanced technique is possibly the more effective for the controled construction of complex oxides layers”, says Fonseca. “With it we did a work of materials engineering, in which we were able to precisely control the arrangement of atoms in the films”, he adds.

The introduction of the new layer in the SOFC resulted in a power density increase of 35% in relation to the best cells of this type. This feature would make it possible to reduce the size of the cell and lower its hydrogen consumption without reducing the electrical current obtained. In addition, the authors of the work verified, through a 1,500-hour test, that the SOFC did not suffer significant degradation. “This work shows how oxide materials can be precisely controlled to build structures that contribute to improving the performance of SOFCs”, concludes Fabio Fonseca.

The work was carried out in the context of the CINE´s Methane to Products division, within the PhD in Nuclear Technology of Marina Machado Livinalli, carried out with the guidance of Professor Fonseca at IPEN/ USP, with a sandwich period at the Institut de Recerca en Energia de Catalunya (IREC), in Spain. The research brought together the IPEN group’s expertise in SOFC fabrication and testing with the Spanish group’s experience in pulsed laser deposition and the use of this technique in high-performance SOFCs.

The research was funded by the São Paulo State Research Foundation (FAPESP) and the Horizon 2020 program of the European Union and was reported in an article published in the Journal of Materials Chemistry A.

Authors of the article who are members of CINE: Marina Machado (PhD student at the time of the research) and Fabio Coral Fonseca (researcher at IPEN).