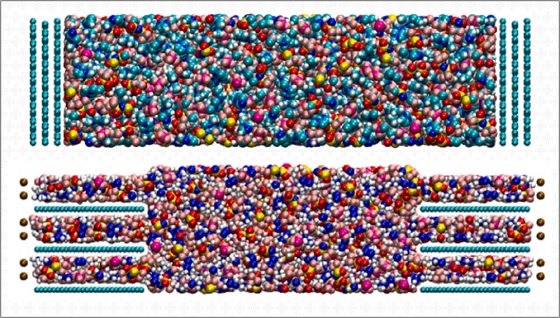 Supercapacitors stand out among energy storage technologies for their power (the speed at which they can charge and deliver energy) and for their lifespan (the number of charge and discharge cycles they can provide). However, these devices are limited in energy density, which is the amount of electricity they are able to store.

In the context of CINE computational division, researchers from UNIFESP have joined the efforts of other scientists around the world to ovecome this limitation. Using computational methods that can describe systems at the atomic level, they studied the performance of supercapacitors whose electrolytes are formed by ionic liquids (ionic compounds, also called salts, which have the particularity of being liquid at room temperature). Among other results, the authors concluded that the energy density of these devices can be very close to that of lithium-ion batteries. The work was reported in an article in the journal Electrochimica Acta.

“What draws the attention of the scientific community to ionic liquids in the context of supercapacitors is the great chemical stability that some of them have”, says Professor Leonardo J. A. Siqueira (UNIFESP), associate researcher at CINE and co-author of the work. “This property could allow the construction of these energy storage devices with high energy density”.

In the work published in Electrochimica Acta, the authors used molecular dynamics simulations to evaluate the power and energy density of supercapacitors formed by porous electrodes, which offer greater capacity to store charges thanks to their large surface area, and ionic liquid electrolytes. They explored the possibilities with two different ionic liquids, both pure and mixed in different proportions, and with porous and non-porous electrodes.

“We showed that supercapacitors containing ionic liquids and porous electrodes with uniform pores of 1 nanometer can store almost the same amount of energy as a lithium-ion battery like those in our notebooks and cell phones”, says Professor Siqueira.

Furthermore, the authors concluded that the physical mechanism by which supercapacitors store charge changes as a result of the volume of the ions and the way they interact with the electrode. “Electrolytes formed by small ions and with low viscosity contribute to the supercapacitor’s greater capacity to store energy without compromising performance in terms of power”, says Siqueira.

The work opens up possibilities to overcome the challenge of developing energy storage devices combining high power and energy density – a demand that becomes more and more important given the growing need to store electricity from renewable sources. “Ionic liquids still have a high cost, but with scale production, their cost may come to decrease and become a reality in supercapacitors and batteries”, comments Professor Siqueira.

The research was carried out within the master’s degree of Pedro Henrique de Lima Ferreira and the PhD of Abner Massari Sampaio, both under the supervision of Siqueira, and had financial support from Brazilian agencies FAPESP and Capes and from Shell.

Authors of the article who are members of CINE: Leonardo J. A. Siqueira (Professor at UNIFESP) and Abner Massari Sampaio (doctoral student).